Things continue to be busy around here with I'm not even sure what, so my blog-slacking continues. I will try to upload some pictures and maybe even a video or two soon, but for now, here are some highlights of what's going on...

1. Charlotte is talking nonstop. She has been for about a year now, but the words are more clear and she's using more and more words each day. She keeps us laughing with what she says and how she says it. She's adorable and she knows it. When she realizes something she has said makes us laugh, she repeats it over and over to get more laughs. It quickly gets to the point where it's not cute anymore, but she rarely stops when there might still be a laugh or two left in us.

2. I pulled the exersaucer out of the attic today and Naomi has been having a field day with it. Charlotte has even enjoyed showing her how to play with the toys on it and it makes me smile to watch them play together already. I am amazed at how well Charlotte has transitioned into her role as a big sister and how loving she is towards Naomi. This morning while I was holding Naomi, Charlotte told me, "Put Sister down here," as she pointed to the bouncy seat, so that I could make breakfast for her. There have been a few of those moments, but other than that, Charlotte has just loved her sister to pieces.

3. I have become a Chick-fil-A addict. I've bought lunch from there at least five times within the past two weeks. Jared asked me if I heard that their sales had gone up 50%, and started telling me about this article he read that said they've been able to target it to their Florida locations and that their Jacksonville locations were now the most profitable and they've pinpointed it to the repeat customers at the restaurant on Southside Blvd., specifically the woman in the Toyota minivan who has been going through the drive-through every day. I thought he was serious until he got to the part about Southside Blvd. He thinks he's so funny... :)

4. Last week Naomi mastered the skill of rolling over, but she isn't really a fan of being on her stomach, so she would then fuss about the predicament of being on her tummy and not knowing how to get back over. She is finally tolerating being on her tummy more and has even started lifting her head to look around and see what is in front of her to grab and play with. This is a skill that comes at an earlier age for many babies, but not all babies are 16.5 pounds before they are 4 months old! She's a chunk and I love it! She continues to have issues if I eat any dairy, but they seem to be getting better. Hopefully I will not be banned from milkshakes and chocolate for the year that I plan to nurse her!

Posted by Brittany @ The Rollins World at 9:48 PM 2 comments Links to this post

Out of the Mouths of Babes

Here are a few cute things Charlotte said yesterday that still have me smiling:

We were getting ready to eat lunch and Charlotte quickly went through her prayer, "Kank-ku (Thank you) Mommy, Daddy, Sister. Amen. Kank-ku food. Amen!" I asked her who we prayed to and she knowingly answered, "God... and Jesus." Then I asked her who Jesus was, and she replied, "God's Son." So yeah, our two-year-old is saved :) I know she doesn't get it at this point but it does make a momma's heart happy to know that she is making connections about some things that can be quite difficult to understand.

And while I was at my Bible study yesterday evening, Jared took Charlotte to the playground in our neighborhood. She looked up and said, "Daddy! The moon! It's pretty!" Then reached up and said, "Can't reach it... Turtle stool?!" Her Auntie Arin and Uncle Dusty gave her a stool for Christmas in the shape of a turtle. (Arin's parents make them, along with lots of other great toys and furniture!). A little later she saw an airplane fly over and again reached up, said she couldn't reach it, and asked for her stool. :)

I love that kid!!

Posted by Brittany @ The Rollins World at 8:13 AM 3 comments Links to this post

Hi, I'm Brittany and I'm a blog slacker. Things have been busy around here. I'm not sure how, but our schedule seems to get filled up quickly. Here are some random photos and stories from the last couple weeks...

(I uploaded the pictures to photobucket, 'cause I heard that's what the cool people do, and I'm still figuring it out, so I apologize for how HUGE the pictures are. If you click on them you should be able to see the entire picture.)

Anson did some worm tracking :)

Charlotte and Anson pulling bark off the tree and playing in the sap. Charlotte started crying when she realized all the adults had gone inside (for no more than a minute)

Charlotte went on a boat ride with Daddy, Uncle Dusty and Anson... no actual pictures of the boat ride because I was getting that on video

Charlotte gave lessons on being cool. Lesson 1: Get some cool shades.

Naomi got lots of snuggles from her Toto

The men made a delicious dinner for us!

I've been enjoying my girls :) How funny is Naomi's expression?!

Naomi has gotten even cuter! I took her to the doctor's office a couple days ago to get a shot and at not even 3.5 months, she weighs 16 pounds 4 ounces! I just love those rolls on her legs!

Something that Charlotte would surely tell you if she saw you in person (but I don't have any pictures of) is that she saw Mickey Mouse! Her Grammy and Grampy (my mom and stepdad) took her to Mickey's Rockin' Road Show a week ago and she had a blast! In true grandparent fashion, they sent her home with a plethora of Mickey loot and she's been walking on air from seeing her favorite characters. The Sunday after the show, our pastor was saying hello to Charlotte but she would not reply with so much as a smile. We kept coaxing her, trying to get her to say something, but she didn't say a thing until we told her to tell the pastor who she saw last night. Then she excitedly went into a long explanation of seeing Mickey and "Goopy" and "Cinnerwella".

Jared and I have noticed that she's picking up on some of the phrases and mannerisms from watching Mickey Mouse Clubhouse. She says "Oh boy!" (she gets this one from Donald) and last night she was being really silly with the way she walked and it looked an awful lot like she was imitating Daisy. Silly girl.

Posted by Brittany @ The Rollins World at 3:30 PM 1 comments Links to this post 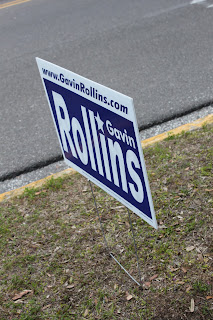 Gavin won his re-election to Keystone Heights' City Council! We were hoping he wouldn't have a running mate so that this election would be a little less stressful than the last, but there were a certain few (the mayor and every other member on the council) who did everything in their power to make sure Gavin had competition and lost. Half of their plan worked. :)

On Tuesday we went into Keystone to help him hold signs, shake hands and kiss babies. The babies being kissed all had the last name of Rollins, but that's beside the point. The weather was not very kind, but the efforts the day of and the many weeks beforehand were not in vain because he won 160-105. (There are 1400 registered voters in the city and that's all that showed up to vote. Isn't that pitiful?!)

Some pictures from the day...

Gavin did a wonderful job campaigning, but I'm pretty sure this waving toddler is what put him over the top 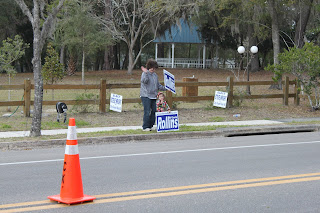 Amber and I discussed potential candidates for the next position to be filled: Mrs. Gavin Rollins! 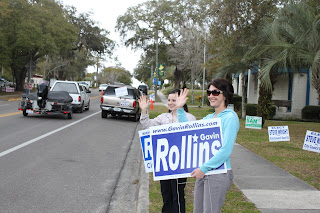 Charlotte spying on the competition with some "nonky-yers" 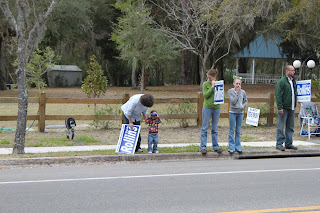 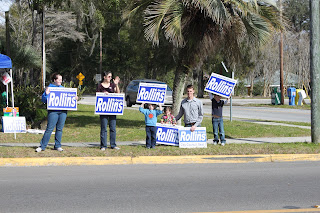 James, another Rollins baby that was kissed :) 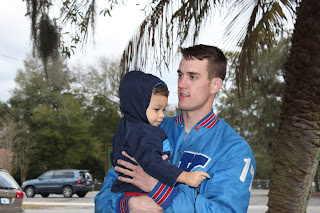 Stephanie and Charlie hosted a victory party for Gavin. They have the most beautiful home and are always so gracious and welcoming of guests, even if they're not there (I've watched Gator games and nursed babies in their home while they weren't there. They're just super cool people like that). 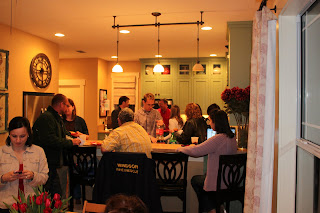 While Stephanie took Wyatt to t-ball practice, I may or may not have (I definitely did) gone around and taken a few pictures of her decorations to copy them.

I know this is only the beginning of Gavin's career in changing the world. I don't want to say his career will only be in politics because Gavin is involved in so much more than that. We'll just say he's at the beginning of changing this world. The good kind of change. Not that bogus kind of change for the worst (not worse... worst!) that America is getting now. ::Steps off soapbox::

Posted by Brittany @ The Rollins World at 9:04 PM 3 comments Links to this post 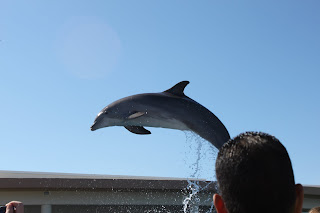 On Sunday, Marineland had a Family Day (which means getting in for free) so we drove straight there after church to see the dolphins. It is a small park and I don't think they were expecting the size of crowd that was there. It was packed in front of the dolphin tanks, so much so that it was nearly impossible to move in some places. The dolphin "show" was quite short, far from what you would expect at SeaWorld, but it was still neat to see and I think Charlotte really enjoyed it. If nothing else, it got us out of the house on a sunny afternoon. The small stretch of A1A we drove is beautiful and we saw a house that we're going to base the exterior of the house we build in 8 or so years on. Until we see something we like better and change our minds next year :)

Naomi really enjoyed it. She went crazy over the dolphins. Oohing and ahhing. Or it could have just been because of gas. 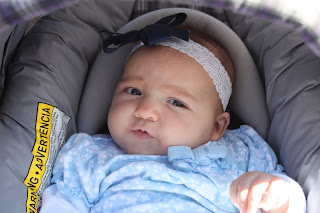 While we waited for the dolphin show, Charlotte had to make sure that her cross was safe and sound buckled up in her stroller. 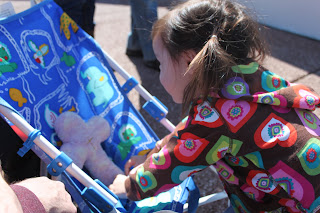 Posted by Brittany @ The Rollins World at 9:56 AM 0 comments Links to this post