Train Up Your Children (And Parents)

Charlotte has suddenly stopped doing the "trick" we wanted to show off :( It was a little game she and Jared played, and they both had so much fun with it. I'm not sure if she's being shy and not doing it because she sees the camera out or if she's just over and done with it, but we did manage to at least get a picture of her showing you what she used to do. Jared would put his finger to his mouth like he was thinking hard and say, "Hmmm... Where should I tickle you?" Then he would point to where he was going to tickle her, count to three, tickle her and the laughter would ensue. And after not too long of doing that, Charlotte started copying him with the finger on the mouth and saying "Hmmm..." It was hysterical! I'll still try to get it on video, but for now, here's a reenactment. 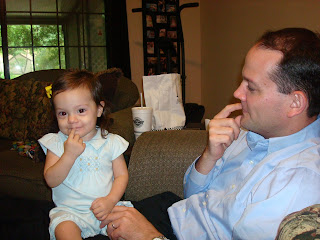 Another "trick" that I've taught Charlotte is to get a diaper from her changing table and bring it to me so I don't have to get up to change her diaper. Yeah, I'm lazy, but I'm pregnant, so what of it, huh? :) So anyway, I added a little twist to the trick and when she brings the diaper in to me, I say, "Now take the diaper to Daddy." And she does! I am sneaky and clever and hilarious, all at once with that one!

But Charlotte has learned a trick of her own: She comes up to us, grabs for our hand, pulls on our finger (not like that...) until we get up, then will walk around the house with us tagging along. If she has grabbed Jared, she is usually dragging him into the office so he will play some of the home videos on the computer for her (she knows where the remote control is that controls the media player- opens the drawer, reaches in, and pulls it out like we keep it there just for her). If she's dragging me along, it's usually into the kitchen to get her a snack ("Nack! Nack!" in Charlotte's language). But oftentimes, she has no real purpose or plan for why she is walking us around the house, I guess she just wants company to look out the window with her :)

Each and every day I look at her and think, "Wow, just yesterday she was so little..." She has so much personality and I just love watching her play and figure things out. I can tell she has quite the imagination already, even though there doesn't always seem to be a clear purpose to what she's doing. One of her favorite things is to pretend she is talking on the phone. If she sees a remote control or anything shaped like a phone, it goes straight to her ear and she starts chatting away. Today she was talking to someone, and was even pausing in her conversation (I guess for the other person to talk), and then started laughing, and kept laughing, as if they were telling her a joke. She had Jared and I in stitches!

Posted by Brittany @ The Rollins World at 8:46 PM

She is SOOOOOOOOO cute. Emphasis on "so". :)

That diaper trick will come in handy when baby arrives! :)

Too cute! Love the stories about what she's doing b/c I already forget about that stuff!