This weekend was quite busy and I'm still not fully recovered. After a phone call to the pediatrician on Friday morning to make sure I didn't need to do anything else for Charlotte's swollen eye, and a reassurance from the doctor that it would be normal for it to be puffier in the morning, especially around the eye where the skin is so loose, the two of us headed down to Keystone. I dropped Charlotte off at Toto's then went up to the church to begin helping Amber with the flowers for Anna and Ethan's wedding. Amber put me in charge of making the boutonnieres for the groomsmen, pastors, dads, grandfathers, ushers, and the corsages for the grandmothers, aunts, and helpers involved with the wedding. I ended up getting some help from Kristin and Sarah, who had never made them before but after a short lesson were naturals in the area of all things flowers. We finished just before the rehearsal and had a great time spending the evening with all of Anna & Ethan's family and friends and eating some good BBQ :)

I wasn't really paying attention to my caffeine intake and didn't realize how much sweet tea and cherry Coke I had drank until I was laying in bed that night. It took me over an hour to fall asleep, and it ended up being a restless night as I woke up every half hour or so. At 4:30 I woke up and could not get back to sleep for the life of me. After a while I decided I'd just go ahead and get ready and head up to the church to help Amber with whatever she still might need done. I got there around 6:30 and had a great time doing some other flower arranging. It was a bit of a different role for me since I am used to doing the coordinating and not as much of the decorating, but I loved it! It was nice, for a change, to not have to stress about the timeline when the hair appointments took longer than planned and to not be the one in charge of getting everyone down the aisle in the right order. I still love coordinating, but it was a nice change.

It was a beautiful wedding with a gorgeous bride and a dashing groom. I was too busy to take any pictures, but check out Pam's, Whitney's, and Mrs. Alice's blogs. They aren't direct links to the posts with the pictures because they each have several posts, so check over the next few days for the pictures as they get them edited and posted.

It wasn't until Jared and I were back at his parents house that evening that I realized how sore I was from all the running around I had been doing that day. From the time I got to the church, I don't think I sat down until the reception (thankfully, I remembered to wear flats!). It was definitely worth it, though, and I was honored to play a role in the day Ethan and Anna became man and wife.

Pam took these pictures after the bride and groom left. Charlotte, being neurotic like her Daddy, was trying to get all of the birdseed picked up. You can see that the swelling in the eye had gone down but left a nasty bruise in its place. 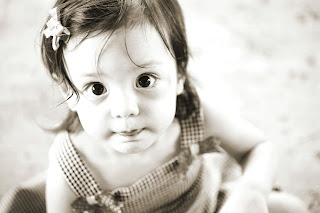 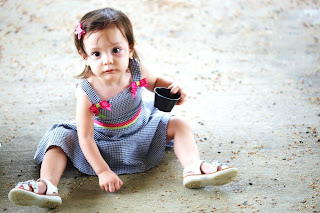 Posted by Brittany @ The Rollins World at 11:47 AM

Thanks for all of your help! Every time I look at the pics of your baby girl, it brings a smile to my heart!! Love ya! Mama Crowder

Adorable! Charlotte is so cute! I'm glad you came along to help Amber! She told us at Hedricks that morning how thankful she was for your help! The decorating looked great! It was such a beautiful ceremony!

i hope charlotte is feeling better! she's so cute - even with the bruised/mosquito eye :). thanks for the link to my wedding photos - i appreciate it. i think everyone's photos are turning out really, really nice!