Last Thursday was the five year anniversary of the doctor telling Jared that the tumor he felt was most likely testicular cancer. It seems like it was forever ago and just yesterday all at the same time. Jared was amazing through the entire process of the surgery, a summer of chemotherapy, and yet another surgery. He did a ton of research, read countless articles, talked to multiple doctors, but ultimately trusted the Lord through it all. At one point when his tumor markers were not where the doctor wanted them to be, the doctor casually mentioned something to the effect of, "You may have a particular type of cancer that doesn't respond to treatment." Jared pondered that for all of about ten minutes before he fell asleep during his chemo session. When he awoke and the doctor had some more test results, he was told that everything was looking good. What would have been a terrible time of waiting for most people, even Christians, Jared resolved that if it was untreatable, he knew where he would be headed and was secure in that. So he took a nap.

I am so thankful that the Lord's plan for him did not end there. Even though the survival rate is very high if it is caught and treated early, something like 98%, there are those who don't make it through. Many who do are not able to have children. Jared made it through and is the father to two beautiful girls. Our God is so good.

At one of his many chemo treatments 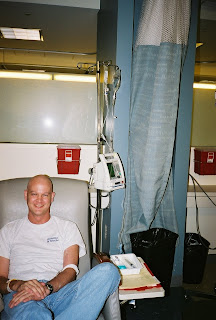 After his RPLND (retroperitoneal lymph node dissection: a removal of the lymph nodes in the lower abdomen) 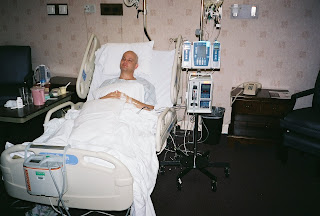 Posted by Brittany @ The Rollins World at 7:58 PM

Oh my, what a blessing, Brittany! I had no idea that you guys went throught that ordeal. Our paster did, as well.

I was watching Oprah last night with Roger Ebert and was just amazed at his strength and peace, even after all that he has been through.

He cannot eat or drink or taste anymore. Yet, he dreamed about a long-lost actual experience of going to the A&W Root Beer stand as a small child with his father and could literally taste everything in his dream. He told his brother-in-law about it, and his brother-in-law told Roger that when the LORD took away his ability to taste, He gave him back his memory!

God is so good.

Hello!
My name is Jenni and I know your blog through my husband's cousin, Tessa Lehman. It was awesome to read this post about your husband's testicular cancer because my husband Robbie and I went through just about the same ordeal 3 years ago. He had surgery to remove the tumor and his last chemo treatment was 15 days before our wedding (he didn't want to postpone). :)

Robbie had often thought and prayed for those around him who were going through treatment while he was (sort of) congnissant during his chemo. He couldn't imagine having to go through cancer without Christ.

So awesome to see that God healed our husbands and blessed us with families. We were told that it would probably be pretty difficult to have a child. Our son Maverick was quite a suprise!

All Praise to Him!

We celebrate with you on Jareds healing. He is a wonderful father and husband. The Lord just had bigger plans and is Glorified through it all! Stacy

What a trooper! We are so thankful for the life you have together!