No, I'm Not Having Twins 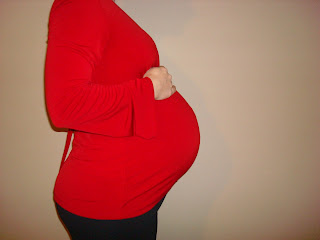 Throughout the pregnancy with Charlotte and Naomi (yes, I'm still pregnant with Naomi...), I have been quite amazed and appalled by some of the things people choose to say to a pregnant woman. I will grant you that I am in a slightly more hormonal state (if you speak with Jared, he will likely exaggerate this condition of mine. Please feel free to ignore his opinion:), so I might be a tad more sensitive to some comments received, but I do strongly believe people need a filter between their minds and their mouths. What you say to a pregnant woman is likely to be translated differently than what you said or how you intended it. And you do not want to make a pregnant woman angry. Or cry. So for anyone who has not been pregnant or been around a pregnant woman to know how she thinks, here are some things to put on your "What Not To Say" list.

"Are you sure you're not having twins?" or "Are there two in there?"
No, kind sir or madam, but thank you for implying that I am large enough to have two beings inside of me.

"Wow, you're huge!"
Umm, thanks. No one likes being told this when they aren't pregnant. Why would being pregnant change this fact at all? C'mon, folks!

"Are you pregnant or just fat/gaining weight?"
Don't mention the words "fat" or "gaining weight" to a pregnant woman. At one of my appointments during Charlotte's pregnancy, a doctor told me that my weight gain was a little high. While I know it is his job to be concerned and keep me informed of the progress of the pregnancy, if even a doctor's comment about weight is translated in a pregnant woman's mind as, "You're fat and you have a chunky butt," the layperson commenting on the subject doesn't stand a chance of getting out of that conversation without great offense to her. And to be on the safe side, just never ask this question. One day you will ask it of someone who is not pregnant and you'll be in an "open mouth-insert foot" situation.

"Are the doctors concerned about your weight gain?"
Seriously? Did you seriously just ask that?

"You'll never make it to your due date"!
Thank you for implying that I am that large. Much appreciated.

"This is your second? No wonder you're showing so early." or "... No wonder you're so big."
For the most part, unless you're telling her that she looks great or is "all baby", it's best not to comment on her size. Ask her how she's feeling or how much longer till she's due. But comments about her size are generally going to be taken badly.

And about the stomach-touching... It's always a good idea to ask if this is okay. Especially if you don't know the person. If I were to approach a non-pregnant stranger and begin patting and rubbing their belly, they would likely look at me like I was insane. Please do not be surprised if I give you, dear stranger, the same look when you touch my baby belly. I don't so much mind the touching from people I know, but for some women, the belly is completely off-limits for everyone. Ask before you touch.

Now, I do understand that there are some women who have gone through their pregnancy feeling beautiful, love being told how large they are getting, and love having people touch all over their baby bellies. They are an anomaly. A rare breed. Not the average pregnant woman. For the sake of not having your head bitten off, assume that all pregnant women have a crazy case of raging hormones not to be reckoned with. Play it on the safe side. Tell her she's beautiful. If she's in the latter part of her pregnancy, she likely doesn't feel it. And even if she may not look beautiful on the outside, she is carrying a precious gift from God and that is a beautiful thing. And just typing that thought made me tear up. My hormones are fine, I swear :)

Posted by Brittany @ The Rollins World at 1:12 PM

Your belly looks tiny! OK, not tiny, but you do not look enormous. I am so serious. We went to the Marine Corps Ball 13 days before I delivered and looking at myself in my black maternity dress I busted up laughing thinking that if it was white I would definitely have been mistaken for a Beluga!

You are right on with your post on pregnancy. I had a Marine in Walmart ask to rub my belly. That was a first for me.
Praying that all goes well for your delivery.

Brittany,
You can not even tell you are pregnant from the back side. You are carrying all up front and are absolutely BEAUTIFUL!!!
I love you.
Mom

You are carrying the same way I did with Mason--all belly! It is adorable.

But I am right there with you--because Mason was so big, you can imagine the rude comments I got. And, because I am showing so early with this one, they have already started. I guess I am vain, but it really hurts my feelings!

The WORST were the church ladies. I couldn't put that on facebook last week. It got to where I would dread going b/c I knew I would leave upset by something one of them said!

By the end of it, my mom would make me walk around Walmart with her to get exercise. A certain very specific demographic which I will not name here seemed to LOVE seeing a blonde pregnant woman walking around. They would stop and stare and make comments about me like I was walking on 8th and Main in Jax. Mike thought I was exaggerating until he was with me one night right before Christmas. No less than 5 men stopped to comment. Of course, he thought it was hilarious!!!

UGH. It is going to be a long pregnancy for me.

P.S. One of them actually gave me a free car wash/detail. I guess something good came out of it. He did a marvelous job, too.

Amen Sister! You and I are both skinny at heart! :o)