Two weeks ago, we were able to make a trip up to Port Wentworth, GA (just north of Savannah) to visit Jared's grandmother. Earlier that week, we received news that she had stage four cancer all over her body, and was told she had between one and two weeks to live. We went up on a Sunday morning and were able to stay until Monday afternoon. The trip was to say what would likely be our last goodbyes to Grandma, but it was not the sad type of occassion that that would be for many people. Grandma has been ready to go home to the Lord for quite some time, and knowing that we will see her again one day eases the pain and sadness. She and Grandpa, who passed away in 2001, have left a strong heritage for Christ. It was neat to see all of the Rollins family, including all 6 of her children and all 23 of her grandchildren (along with most of the spouses), and many of her great-grandchildren there. There are few families who can say that everyone within it is a Christian and following the Lord, but Grandma and Grandpa raised their children to love the Lord, who have raised their children to love the Lord, and who are now raising their children to love the Lord. Grandma is still hanging on, but we know it won't be long before we can celebrate the life she has lived here on earth, and rejoice that she has a new life in Heaven!

Grandma's house isn't really much wider than what you see here, and it was packed with people who love her dearly. Someone counted and said that over the weekend, 50 people had come by to visit. 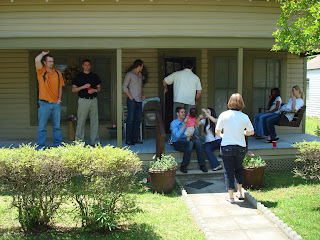 I'm not sure why, but we didn't get a good picture of Grandma that weekend. This is the only picture I can find that she's in (far right, sitting in her recliner). Like all good southern families, everyone is eating. The people of Grandma's church, Port Wentworth Christian & Missionary Alliance (one of the several that she and Grandpa planted), brought so much food over for us. Even with the multitudes of people there, we ate off of what they brought for several meals, and still had plenty left over. 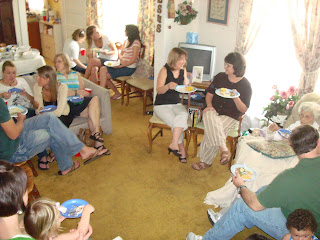 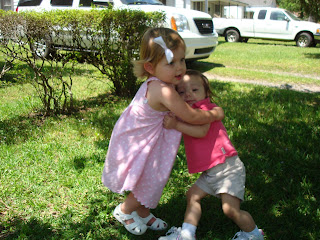 Ella's hug turned into a tackle 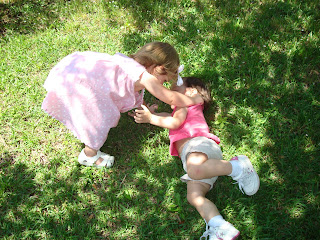 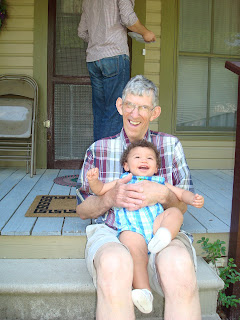 Posted by Brittany @ The Rollins World at 3:05 PM

This is the sweetest post. What a wonderful "goodbye for now" opportunity.

PS-let me know if Charlotte wants to come play with me and my camera in the yellow flower field. :o)