Today has been quite an exciting day for us! We woke up to find that our Christmas tree had fallen over. Completely. On the ground. Splat. I heard a noise during the middle of the night that woke me up with a jolt. But Jared didn't move at all so I convinced myself that it must have just been a dream. When we woke up this morning I put two and two together. Yesterday Jared asked me, "Does the tree look like it's leaning over a bit?" Perhaps out of laziness, we convinced ourselves no, or at least that it wasn't leaning badly enough to warrant a change in positioning. What is funny is that yesterday I shampooed the carpet in the living room... everywhere except right behind the couch. There's hardly ever any foot traffic back there and I was tired from holding Charlotte on my hip while pushing the heavy steam vac (the noise of it scares her so I have to hold her while I do it). So this morning I pulled it back out and did the area I hadn't done yesterday to get any sap up. And the stand was pretty close to empty of any water because I hadn't put in any since we initially put it up last Friday, so it could have been an even bigger mess. After getting it as straight as we could I went to redecorating. About half of the ornaments had fallen off, and through it all we only had two ornament casualties - not from the tree actually falling. From me dropping one ceramic ornament onto a glass ornament while putting them back on. Go figure. 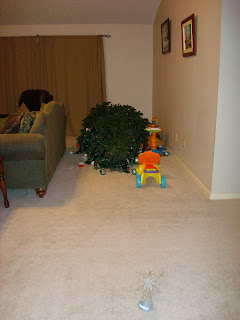 I put some of Charlotte's birthday presents around the tree to make it look not so empty :) 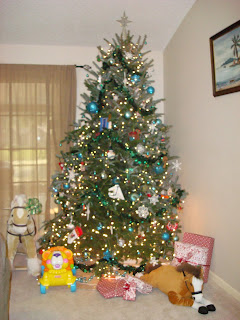 This afternoon we went to the house of some friends from church. They are fellow Gator alumni and as fanatic about football as we are. Another couple who are fans as well joined us and we had a great time watching the Gators roll right on over that Crimson Tide. It was an exciting game that had us quite nervous throughout most of it, and we are thrilled that the Gators will be playing in the second National Championship game in three years! It's great to be a Florida Gator! Timmy Tebow may not know it yet, but he is my future son-in-law. He can begin courting Charlotte as soon as she turns 18 :)

Charlotte and Andi each playing with the other one's barn. Most of the game they were discussing Tebow's chances of winning the Heisman again, but they took a breather to play with the animals in the barns for a few minutes 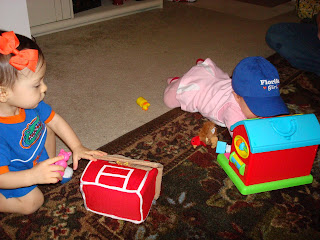 And then... After the game we went to Borders to see Mike Huckabee at his book signing! They had the line moving quickly and we didn't have time to get a posed picture with him, so Jared graciously let me go up while he got as good of a shot as he could with so many people in his way. Governor Huckabee was as sweet in person as he seems on TV. He shook my hand and asked if that was a Gator shirt I was wearing. I confirmed and he said that people must have gone straight home to put it on before coming to the bookstore. Then he gave a little wave and a smile to Charlotte and told me to enjoy the night. He's the biggest "celebrity" that I've ever met so I'm still a bit awestruck. Huckabee/Jindal (or vice-versa) for 2012! (I totally wanted to say, "Hello, Govnah!" in a British accent. I can't remember where that line is from but I thought it would be hilarious!) 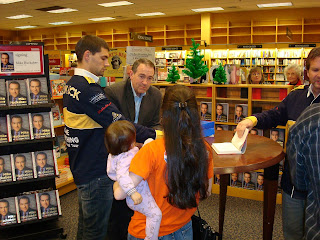 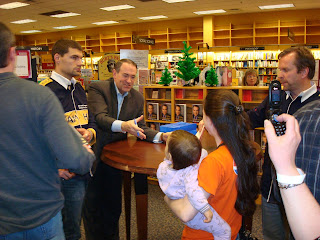 Posted by Brittany @ The Rollins World at 9:31 PM

Ooops! :o) A real tree is so hard to get in there straight. We haven't had our tree fall over before but one year it dropped all of its needles and was bare! Beautiful!:0)

Oh, and Go Huckabee! He spoke at our church 2 weeks ago and we enjoyed seeing him too! I wish you would have used your "Govnah" line! :o)

Okay! I am really, really jealous. Thanksgiving weekend, Mike was supposed to drive me to Albany, GA to go to his book signing there. But he woke up with the crud that I had given him. So we missed him. :(

P.S. So sorry about the tree!