Forgive me for being a total blog slacker... I have no excuse other than my own laziness :(

Last weekend we took a trip up to Port Wentworth, GA to visit Jared's Grandma. We found out last week that she has a malignant tumor behind her tear duct and will be having surgery on the 14th. So with that news, all the Rollins gang decided to head her way and cheer her up! I don't know if we cheered her up or just wore her out, but we had a great time (and hopefully she did too!). We had seen her and Uncle Bennie a few weeks before at the family reunion, but really didn't get to spend much time with them because there were so many people there, so it was nice to just to be able to sit and talk with her and the rest of the family for a while.

After visiting with her on Saturday morning, we went into downtown Savannah for some sight-seeing and dinner. We were hoping to be able to go to Paula Deen's The Lady & Sons, but around 2:30 or so when we were there, they were already booked for dinner. And even though we all agreed that it would be nice to eat at someplace distinctly Savannahian, we ended up having dinner at Tony Roma's. :) It turned out great though because we were the only group seated downstairs so it was nice and quiet (as quite as it can be with two babies and a very lively three year old!).

We went to church with Grandma on Sunday and shortly after lunch and birthday cake for she and Uncle Bennie, Jared, Charlotte and I headed back home. Unfortunately, Charlotte is still not a great traveler. She had a tantrum in her car seat for about 30 minutes on the way home. We stopped for gas and Jared hopped in the backseat with her and she was fine from that point on (as long as she was holding her "Comfort Cross"-- whenever she dropped that, she started fussing). And before we take another overnight trip, I'm going to have her "practice" sleeping in her pack and play during naptime. She did not sleep well either night in the hotel and ended up in bed with us for most of both nights. ::Sigh:: If any moms have any suggestions for this problem, feel free to share!

Here are a few pictures from the weekend...

Charlotte and Grandma (Thanks for the picture, Arin!) 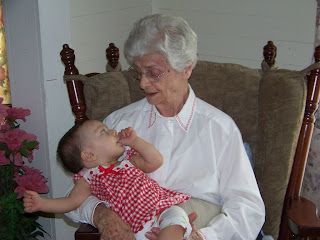 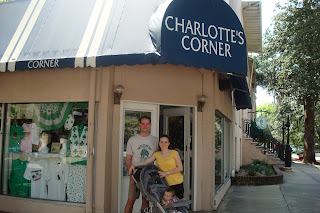 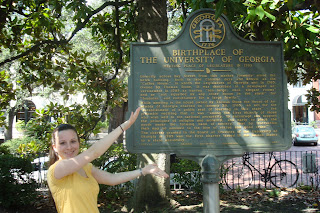 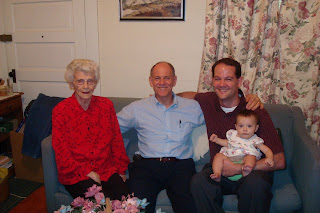 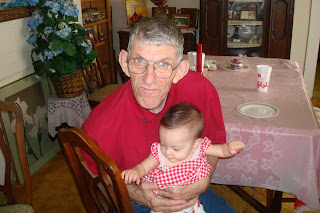 Posted by Brittany @ The Rollins World at 4:10 PM

Loved your pictures! Hope you've recovered from the weekend! We had fun being with you!

Okay...the whole gator chomp in front of the UGA sign is pretty much sacrilegious.