It's been a while since I posted, so here's a quick recap of the last week or so in the Rollins househould...

We didn't have any damage other than downed limbs and a soggy yard from Fay. Lots of wind and rain, but overall it wasn't bad here.

We made an overnight trip to Melrose so we could visit with Papaw and Lillian (Jared's grandfather and his girlfriend) before they headed back to Bradenton. We enjoyed hearing about their trip to Indiana to visit family, and Charlotte enjoyed all the attention. She also really enjoyed "Mr. Bear", the stuffed bear that somehow or another ended up being passed to Mom and Dad. He's usually dressed up for the upcoming holiday or season, so of course he was sporting his Gator shirt! Charlotte had a great time giving him lots of [bear] hugs. 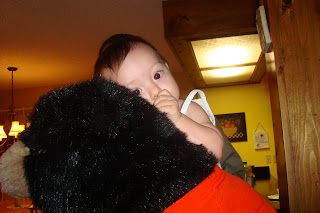 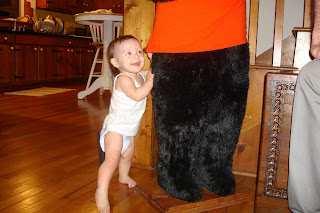 Charlotte started getting a stuffy and runny nose a few days ago and is still fighting off a cold. She slept through the night last night but that was the first time in several days. Her nose was getting so stuffed she couldn't breathe through it, which made sucking her thumb difficult. It was so pitiful :( The cold was passed to Jared, but it seems like he might be rid of it before Charlotte is.

On Saturday morning, my mom stopped by with some friends for a few minutes to see Charlotte (Jared and I don't get visitors anymore... Charlotte gets tons though!). Later in the day we went to a friend's house here in Jax to watch the Gators put a nice thrashing on Hawaii. Austin and Ashley are fellow Gator grads and are as equally obsessed (if not moreso!) with the football team, so it was a lot of fun. Another couple, Jeff and Lynn, and their little girl, Andi, were there too. Andi is a couple months younger than Charlotte and Charlotte seemed to think that Andi was her toy. :)

And then Saturday afternoon Charlotte and I went to the booming metropolis of Hampton to celebrate my Grandma's 85th birthday (Jared was feeling too crummy to go)! She slept the whole way there and home, which made the trip much more pleasant. Unfortunately, while we were there she was not in the best of moods so she wasn't too keen on being passed around the family. Here she is (in her Gator gear!) with her Papa. 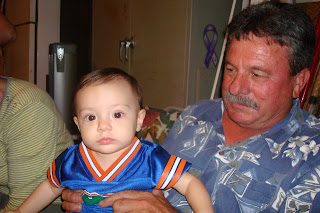 Charlotte is getting into just about everything within her reach and she's started lifting her leg to try to climb to whatever may be just out of reach. She's even gotten herself stuck a time or two underneath the hutch in the kitchen reaching for something. She's very curious and very mischievous. She's also started waving, which is so funny to see. It's not a small dainty wave of the hand... she gets her whole arm into it! It looks like she's pumping water from a well.
The past few days she's had a new fascination with looking out the window in the office. 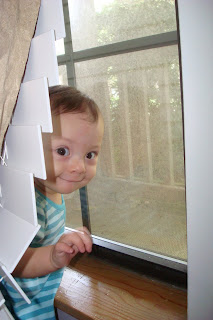 She's starting to make the "mama" sound, but I don't think she's saying it in reference to me. But the fact that she's said that before "dada" gives me hope that "Mama" will be her first word!

Well I think that's it. We hope everyone enjoyed their nice long weekend! I'll do my best not to be such a blog slacker in the future!

Posted by Brittany @ The Rollins World at 1:29 PM

Great to get the update! You have your hands full with that little munchkin of yours! She is so adorable! I love the picture of her peeking out the window! She's trying to see what she can get into next, right? Fun! Hope you're all feeling better.