Charlotte came three weeks early so I am in disbelief that I am still pregnant. Seriously. Every pregnancy is different, I know that. I've had so many women tell me, "Oh, my first was three days early, my second was a week late..." But I always silently thought, "Yeah, but three weeks early is a little different than three days or even one week." Then Jared's boss had to go and tell Jared that one of his kids came three weeks early and the other one came two days late. Heart-Breaking. So I'm trying to get it into my head that I might be dealing with the aches, pains, and discomforts of pregnancy for two or more weeks still. But I'm still hoping, praying, and keeping my fingers crossed that Naomi will be here sooner rather than later! In the meantime, I'll do my best to focus on enjoying the movements, kicks, and hiccups that carrying such a blessing brings.

Pretend like the lighting isn't absolutely horrific and that the mirror doesn't have toothpaste splattered all over it. But look how low I'm carrying her! It has to be soon, right? 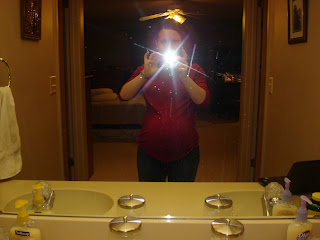 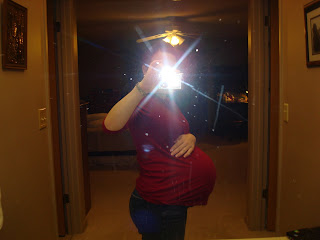 Posted by Brittany @ The Rollins World at 7:00 AM

Hey girl - your belly is so cute. You are crazy to think otherwise! Praying she comes in perfect timing and that you can have some rest and peace until that moment arrives!!

Brittany-you are so tiny! It looks like you just shoved a basketball under your shirt so you can play preggo :) (I KNOW that's not how you feel but you LOOK great!!) We can't wait to meet Naomi...and learn what her middle name is! I'm still rooting for Naomi Olivia :)

Naomi Kate FOR THE WIN! Haha :)

I hope she decides to come soon & not be stubborn ;) Good luck, Mama! You look great!

All in good time! Enjoy every second of it...and the longer she stays in, the better.

Look at that Belly...so cute! Thanks for the comment on my blog. If you make some stamped silverware i would love to see some pics. Good luck on the birth of your new addition!

You look faaaabulous, dahling! I hope you're not too miserable right now. Maybe the eggplant will work.