This past Saturday, my best friend, Shannon, threw a baby shower for me and Naomi at her mom's (Mrs. Nancy) house in Keystone! It was a sweet time with family and close friends who I don't get to see often enough from our old church. Naomi racked up with some adorable outfits, lots of diapers, and some cute baby accessories, including some of the cutest homemade burp cloths you've ever seen (thanks to Mrs. Martha, Shannon's grandmother)!

Shannon and Mrs. Nancy planned a great shower for Charlotte two years ago, but unfortunately we weren't able to make it. Charlotte decided to make her appearance into this world three weeks early so the Sunday morning she was born, Shannon was spreading word to all the ladies in the church that the shower was cancelled on account of me being in labor :)

I know some people think it's tacky to have a baby shower for any child that's not the first, but a friend of mine made a good point to me: Every child deserves to be celebrated! That doesn't mean that I think every child needs a baby shower and I am in no way asking for one for any and all future children of ours, but every child is a gift from God. Every birth should be anxiously anticipated and recognized for the special blessing it is. That's my two cents. **Steps off soap box**

Here's the one decent photo of me from my camera that I approve for blog publication. Apparently, I cannot make an "aww" face without looking like I am trying to pass gas. 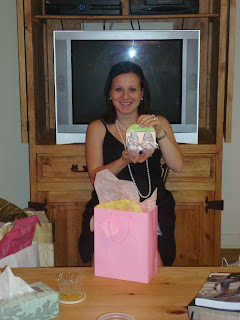 But the fun didn't end when the shower ended. Oh no, that would be too easy. When I went to pull the van around to load up all the gifts, I realized it was driving a little funny. I guess it does that when you have a flat tire. It took six of us ladies who were still there, but we managed to get the tire changed (thankfully I had a spare)! Most of the work was actually done by Lacey, the daughter of a friend of the family's. The youngest of us all. She's still in high school and totally whooped us all in the tire-changing department. I'm very grateful the tire went flat when it did and not while I was driving. It was in bad shape- threads sticking out and all. If I had been driving, I'm sure it would have blown rather than just go flat and I can only imagine the damage that could have been done. But God was looking out for me and I was able to get to Tire Kingdom in Middleburg and get four new tires. And a new brake line. And a new something else. I think the guy also said something about taking care of the unicorns jumping around in the engine. Half a million dollars and about three hours later, I was finally headed home!

Posted by Brittany @ The Rollins World at 9:10 PM

I am with you on your soapbox for second (or third, fourth, etc) babies. :) I've read on a couple of blogs where they called it a "Sprinkling" for the later babies instead of a shower. I thought that was cute! It was great to see you Saturday!