I know better, I was taught better, and I don't know what I was thinking...

Over two and a half years ago Jared and I were married (newsflash, right?). A couple months after we were married, I took my wedding dress to the local dry cleaner's to have my dress cleaned and preserved. I had previously called and talked to the owner about the process: they sent the dresses away to be cleaned and preserved, and I was told a time frame of 6 months to 1 year before I'd have my dress back. I dropped the dress off, got my regular dry cleaning slip and went off on my merry way. Mistake: I did not sign a contract or get anything in writing. What was I thinking?!

Around six months later, I called to see if my dress had come in. No, it hadn't, but I was told by the owner that he had spoken with the preservation company, all was well with the dress but they just had a surplus of dresses and were working hard to get caught up.

I called around the nine month mark and was told pretty much the same thing.

And that's where I lose track of how many times I called and when those calls were made. But I called every couple months. Sometimes, multiple times per month because it was like pulling teeth to get a call back. Mistake #2: I should have started recording when I called, who I spoke with, and what I was told.

Throughout the last year, I was told that the company took on extra dresses from a company in Louisiana that went out of business after Hurricane Katrina. And I was told about fifteen times that the owner had just recently spoken with the preservation company and my dress should be arriving any day. Finally, about four months ago, I was told that my dress had arrived, cleaned and preserved, but the box was busted in shipping, which ruined the whole "preservation" part of it, so they were sending it back to the company, but that it would not take long to get it fixed and it would be sent directly to me. I asked to have the tracking number and order number sent to me and the owner called and left me a voicemail saying that he would call me a couple days later and give me all that info. I never received the call.

So I called. And called. And called. Someone answered the phone about half of the time. The others it just rang and rang. Any legitimate business should have voicemail! Even if it's just your cell phone's voicemail! Seriously! When the phone was answered, it was always the owner's "uncle". I now believe that this "uncle" was, in fact, the owner, just avoiding having to explain anything to me. The "uncle" always told me his nephew would call me back as soon as he returned from his deliveries. He never did. Every time I called I told him that I had not had a returned call for months. He assured me all of my messages were getting to him and that I would have a call that night. He never called.

So I drafted a letter to him telling him that because he never contacted me to give me the preservation company's contact info with the order number so that I could pursue retrieval of the dress on my own, the only option I had was to ask him for the money to replace my dress. Before I sent it out, I called and spoke with the "uncle" and he was so excited to tell me that my dress was in. He said that the company had gone bankrupt and sent the dress back. It had not been cleaned or preserved, but they had it in their possession. I told him not to do anything with it or to it, that I would be there to pick it up.

I called this morning before leaving to make sure that someone would be there throughout the day. I did not want to drive all the way over there to find it was closed for lunch. He said someone would be there so I packed up and headed over. When I got there I prepped myself and put my game face on. I tend to be too nice and forgiving, but two and a half years, countless unanswered phone calls... keeping those thoughts in the back of my mind helped me keep a ticked-off expression on my face.

I went in, told him I was there to pick up my dress and he acted all excited to see me. He was very nice, apologized profusely and told me the story... (What had happened was...)

Apparently, the company that he sent it off to, he had worked with for over twenty years. They went bankrupt and another company took over their workload. That company went bankrupt, and (if I understood him correctly), the dresses were sent out to about six other companies, but the computerized system that had been used lost track of a lot of the dresses and they are likely to never turn up. The dress that was sent to them that was supposedly my dress (the one that had the preservation box busted during delivery), ended up not being my dress. That particular dress is one of the ones that is floating in Land of the Lost Dresses. But my, thankfully, was returned. Not a thing had been done to it. No cleaning, nothing. It was still hanging in the Jay's Bridal garment bag I dropped it off in.

The owner was very apologetic, seemed sincere, told me he hated that it happened like it did, yadda, yadda, yadda. Usually, the softie that I am, I would have given him a half-hearted "Oh that's okay. I'm just happy I have my dress..." But this time, I went all bridezilla on him and said, "What was most frustrating through this whole process was that you wouldn't return my phone calls." Oooohhhhh! Yeah, I totally laid the smack down with that one. (I don't get it. When I'm "Wedding Planner Brittany", I'm a total wedding nazi. I'm always polite, but very firm in my expectations, and I seem to be respected and taken seriously with that role, however infrequently I play it. But when I'm just "Minivan Mom Brittany", I get much too reserved. I don't know why I couldn't unleash my inner wedding planner on him!) He was at least honest with me and told me that he was avoiding calling me back because he didn't want to tell me the truth of the situation: my dress could possibly be lost and never returned.

But, there's a happy ending to this story: I have my beautiful wedding dress hanging in my closet! If I wasn't carrying an extra 20 pounds in the belly right now, I would totally have been wearing it when Jared got home from work :)

Melissa, if you've made it through this story without keeling over from absolute frustration, I know you taught me better. I hang my head in shame. I now plan to take it to David's Bridal, where they may overcharge, but at least I know I can count on getting it back cleaned and preserved in less than two and a half years!

And because I love my dress so much, I'm gonna show it off! 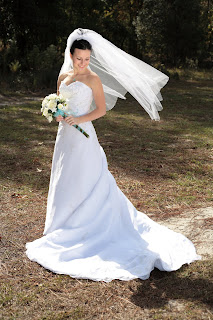 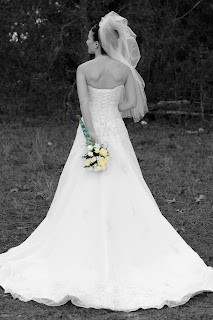 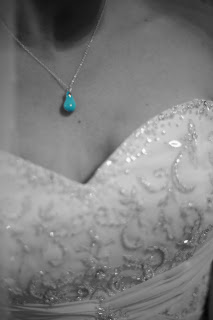 Posted by Brittany @ The Rollins World at 10:00 PM

Wow! That is amazing that you got it back! I'm so relieved! You looked so beautiful! And If I could fit into my dress from 12 years ago I would totally wear it when Dusty's gets home too! :o)

I'm SO glad you got it back. I was thinking about you and your dress situation the other day as I was staring at mine trying to decide what to do with it. I think I may just take it to be cleaned/preserved at David's too. I'm definitely leary to use any cleaner since you had to go through all of this!