This week has been one of recovery! I have been wiped out from the Texas trip. With the exception of yesterday and today, I don't think I made it out of my pajamas before noon at all since we've been home. And that's only because I'm paranoid that even on a quick trip up to the drive thru, I'll get in a car accident and have to step out of the van in my scruffy pajamas :) And in full disclosure, on Wednesday, I was still in my pajamas when Jared got home from work. One of the perks of being a stay-at-home-scrub mom!

Yesterday, we had what was intended to be a "5 Year Class Reunion". I know it's traditional to wait 10 years, but I had many people tell me that they'd really like to have one at five years and as the Class President, I agreed and tried to oblige. Well, our class funds are pretty much at $0, and I didn't start planning far enough ahead of time to get deposits from anyone, but after talking it over with several of the other class officers (namely Gavin, my Vice President, senior prom date, and now brother-in-law!), we decided something more casual would be fine for the five-year mark. So we picked a date, time, location, spread the word as best as we could within the time allowed. It was to be yesterday at Keystone Beach from 11-2:00. No agenda for the day, just come, hang out, bring some food, play some volleyball, and reminisce about the olden days...

I am certainly glad that I did not go to any trouble to order food or plan any games, and am even more glad that no money was put out by myself or any of the other class officers... because only five people showed up. Well, nine, including two spouses and two toddlers. But five people from our class. I was somewhat disappointed, until I realized that the four others who showed up were four of the people I was closest to in high school. They were four people who had everyone else in the class showed up, I would have been disappointed with the day if they had not. So the trip to Keystone was not what I expected, but was definitely worth it. We sat around Keystone Beach roasting (even in the shade) until 12:15 or so, then decided to head up to Johnny's for lunch. It was great to see them and it made me grateful that my best friends from high school are still my best and closest friends even now. All five years that we're removed from high school. :)

The Class of 2004 (minus Gavin, who had to leave before we thought to get a picture), including me, Kristina, Shannon, and Windee 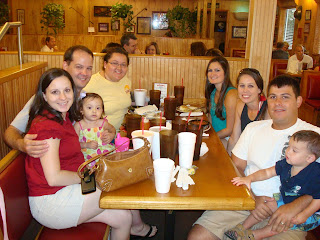 Yesterday afternoon I started working on getting the bathroom cabinets sanded so that I can repaint them. For the second time. The first time I tried, I gave them a half-hearted sanding before applying the paint that was leftover from when we had the exterior of the house painted. That's right, I used exterior paint on the interior. And apparently, that's a no-no. If only we had someone in the family who owns and runs a paint business who could steer me away from such mistakes... Yeah, I'll blame Dusty. It's easier that way. So exterior paint is different from interior paint- I thought it was just made to be more durable. But there's more to it than that, as I found out. It needs the sunlight and all sorts of other explanations that the guy at Lowe's can tell you while he's looking at you like you're an idiot for not knowing those things. Otherwise it bubbles up and doesn't go on smoothly and just makes a mess of everything. And then you might end up with those ugly half-hearted sanded and horribly painted cabinets in your bathroom for several months because you don't have the energy to mess with them. Not that that happened here. I'm just saying, some people might run into that problem.

So yesterday I took my new sander and made a mess of the back porch while I sanded them down really well. I still didn't do as good of a job as I probably should have, but I think it was good enough. I'm impatient and I'll never learn. Then I gave the cabinet and front of the cabinet doors a coat of tinted primer. After dinner I'm planning to do the backs of the doors, and hopefully tomorrow I'll be able to get myself out of my pajamas and into public-appropriate clothes so that I can get some interior paint. My window of time for painting during the week is pretty much limited to Charlotte's naptime (ha! Like I won't be taking a nap myself:) and after her bedtime, but I'm hoping this project can be finished by the end of the week. That's my goal. And all five of my blog readers can hold me accountable to that. If I'm not finished by then, feel free to give me a good lashing in the comments. That'll teach me to get my butt in gear!

Posted by Brittany @ The Rollins World at 10:43 PM

I'm excited to see the finished product :) Hmm..maybe that's why exterior and interior are different? Who woulda thunk?! Have a great week, Brittany!!