This may look like an ordinary photo of a cute little toddler playing in her exersaucer, but oh, it is so much more than that. As I was sitting on the couch with my back turned to her, she managed to climb in there all by herself. I'm still not sure how she managed it, but you can see that she doesn't care to be bothered with things like sitting in frontwards. After this picture was taken I raised the height of the exersaucer to try to prevent any more secret entrances into the toy. I'm scared she'll fall in head first and hurt herself. Charlotte, of course, did not appreciate my concern for her safety. She only sees that now she cannot climb into it on her own and is not amused by this change. Mean Mommy. 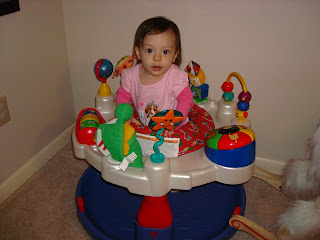 Part of yesterday's breakfast was chocolate chip muffins. Maybe we'll save those for when she's a little older and less of a messy eater. When does that happen, by the way? 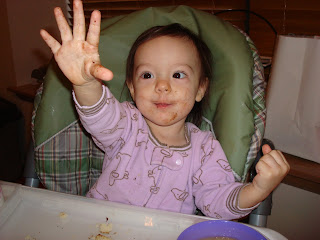 Last night Jared tore off a few pieces of his (gourmet) grilled cheese to give to Charlotte. She didn't want to eat them, but she thought starting a collection of them would be nice so she began lining them up on the desk. 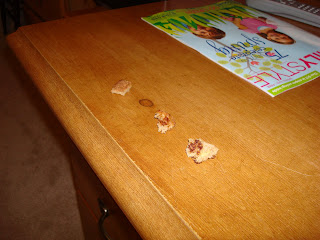 This picture is from about a week or so ago when we peeked in on her before we headed to bed. Notice the Cross tightly wrapped in her arms. A new lovey that she has is a blanket that Mandy & Aunt Diane gave her for her birthday. It's soft and cuddly and pink and gets carried around the house with her Cross. She's still a little under the weather with a stuffy nose and cough, so she's cuddlier than usual. Cuddlier? Sure, that's a word. 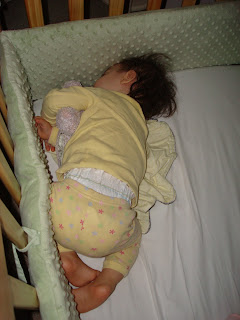 And this picture is from this past Sunday when we were working in the nursery. Though she's been too big for them for quite some time, Charlotte loves the infant seats. She was up late on Saturday night and was extra sleepy on Sunday morning, so she spent a few minutes just bouncing in the seat. 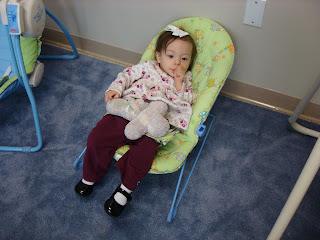 She has been enjoying her books more and more these days. She'll actually sit still for a few minutes (sometimes), so we've started reading to her more. Jared really enjoys the time of reading to her before bedtime. They read for a few minutes, then turn the lights out and he sings a few songs to her, then puts her in her crib. She loves it. A few days ago she was playing in her room, then came into the office where Jared was, and held up the book in her hands to him. Seriously, how sweet is that?! This picture was taken just a few minutes ago. She climbed up into the chair where her Daddy reads to her with the book he reads from each night. 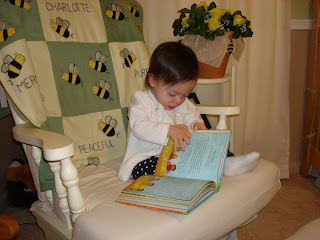 Posted by Brittany @ The Rollins World at 10:55 AM

Too precious :) That last one of her in the chair was just the cutest thing ever!

Right-my boys are almost 3, almost 6 and over 38...I'm still waiting for them to become less messy eaters! :) I love the one of her in the crib-Luke ALWAYS slept like that-butt up in the air!
Charlotte is such a cutie-pie!

I love the last pic... she is thinking of her Daddy reading to her! Anson did/does the same thing! The other day I thoughtlessly handed Ella a granola bar in the car. It had tiny chocolate chips and she had on a white sweater...I don't know how she made those chocolate chips stretch so far. It was everywhere! But she did is so quietly! :o)