I haven't been regular in my posting for a while, so I've neglected to mention the fact that Naomi is now mobile. She's been scooting around for at least a month now and has finally gotten the hang of keeping her knees tucked up underneath her to crawl. She's pulling herself up on the coffee table (and has fallen backwards many times) and standing in her crib (fell overboard... gave her Mama a heart attack on that one!). So she's getting around the house and getting into everything these days.

A week or two ago she scooted her way into the foyer, one of her favorite spots, because of the stack of Southern Livings and the gator head. She managed to pull them down before we realized what she was doing. Once we did, I ran for the camera of course, and Jared chuckled and said, "Go Gators!" Charlotte, poor thing, has her mommy and daddy's (very corny) sense of humor because she thought that was hilarious! We think it was the first time that she has heard a joke (or pun or slightly ironic statement) and actually "got" it :) 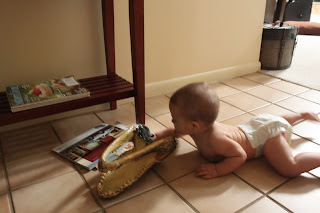 (I swear my kids are not always naked... We're really not as redneck as we seem.)

Posted by Brittany @ The Rollins World at 8:00 AM

You have to love kids with a sense of humor. ;) I wanted to stop by and say thank you for stopping by my blog the other day. :)