This morning we headed over to Melrose to see Dusty, Arin, Anson & Ella while they were passing through on their way back to Atlanta. I love seeing the kids play together, especially since they don't get to very often because of the distance. The girls were so cute and were both immediately drawn to the tiny bench at Toto & Pop's. We were able to visit with Pawpaw, Jared's grandfather, and the boys played soccer while the ladies stayed in and played with the kiddos and fought them all to take a nap. 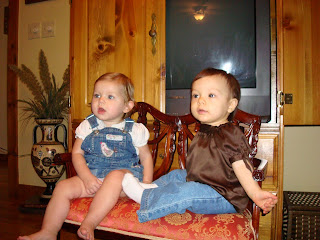 From there we went to Charlie and Stephanie's house to watch the game. We were kind enough to give them at least a ten minute warning that almost the whole Rollins gang would be coming over, even though they wouldn't be there. They were very gracious and made us feel very welcome. Stephanie, I hope we didn't leave a mess! If you and Charlie weren't such sweet and warm people, you wouldn't have to worry about last-minute visits:)

Charlotte had fun playing with Luke and Wyatt's toys during the game. Here she is modeling her armor of God 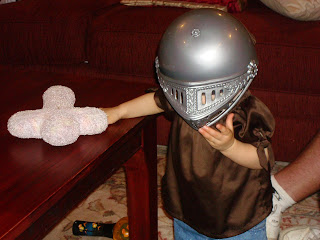 And a couple cute pictures from the past few days...

Charlotte was playing in the living room while I was in the office yesterday. It got quiet for a few minutes, which always worries me, and when I went to inspect the situation, I saw her smiling at me from the recliner. I'm not sure how she managed to get up there, but she was as content as could be just sitting there. 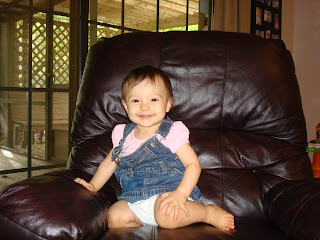 I usually go in to check on Charlotte and make sure she's covered up right before Jared and I go to bed. Last night she was snuggled with her legs tucked underneath her and her hiney in the air. 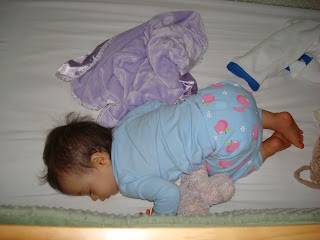 And for those who didn't catch the game, we blew out South Carolina and are well on our way to the national championship game! Two times in four years... not too shabby, Urban. It's always exciting to watch Tebow play because he is going to be our son-in-law one day. He may not know it yet, but he and Charlotte will be getting married!

Posted by Brittany @ The Rollins World at 9:27 PM

Brittany, you all are always welcome in my house-whether I'm there or not! (Sorry I don't have more girly toys!) I'm glad everyone got to spend some family time-it's good to take advantage of that whenever you possibly can! And, doesn't Charlotte look so cute in that armor :)
GO GATORS!!!

I love Charlotte in her armor, how cute! She is so beautiful! I don't know how you ever get anything done. I'd be playing with Charlotte all day :).