My best friend, Shannon, is getting married in three weeks, so this past weekend we had a weekend away to celebrate with just the girls! She threw an amazing bachelorette party for me two years ago (though these past two years have flown by and we kept talking about the party "last year" because it can't possibly be almost two years ago). I didn't want to do the same exact thing for her that she did for me because I wanted to be at least somewhat original, but there really wasn't anything more perfect for her than a weekend at Disney, so that is just what we did!

We had an amazing dinner on Friday night at Seasons 52. They rotate their menu items based upon what's in season, and every item on their menu is 475 calories or less! And it was sooo good! After that we checked into the Caribbean Beach Resort at Disney. The resort is beautiful and the service was amazing. We forgot forks and someone from the pizza place on property brought us some so we could eat our cake! Brownie points for Disney! On Saturday morning we went to Epcot, where they were having the Food & Wine Festival. I, of course, laid off the wine but I did try several of the foods from different countries. My favorite was the samosa from India! After a long day in the park, we went back to the room, freshened up, powdered our sunburned noses, then headed to the House of Blues in Downtown Disney for dinner. 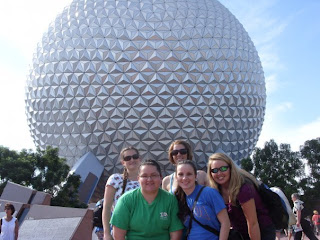 We had a great time and it was nice to get away for the weekend with just us girls, but I was really excited about getting back home to see my little girl. It was the first time I was away from her overnight... and it was for a whole weekend! She and Jared had some good father-daughter time and she didn't give him any problems, other than not wanting to take the bottle right away on Friday night.

On Sunday afternoon the weather was nice and cool so we went to the park that's just down the street from us to let Charlotte play on the swings. She seemed skeptical of the swing at first but eventually warmed up to it. The we tried the slide which she really loved, then we put her on a dinosaur with a large spring and bounced her around in that for a while. She had some of the cutest expressions that were cracking us up! 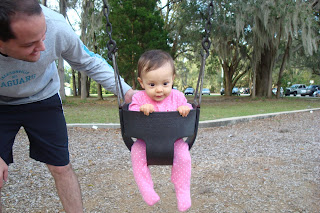 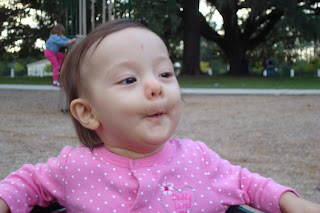 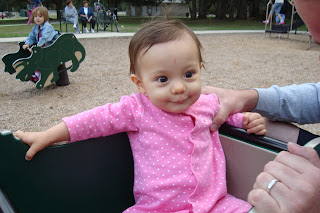 Posted by Brittany @ The Rollins World at 8:24 PM

How fun! What a great weekend! I LOVE Charlotte's expressions! I can't wait to see her "funny face"!

I just read this! What a blast the whole weekend was, can't stop thinking about it :) Charlotte's expression on the second picture is priceless!!