On Saturday we returned home from a week long trip out west. Jared had a conference for work in Las Vegas, so we made a vacation out of it and planned to see the Hoover Dam, the Grand Canyon, San Diego Zoo and Mexico. My Dad warned that Tijuana may not be the best idea because it is a typical border town and not the safest place. That put a little bug in our ear so we asked around when we were there and didn't get any positive feedback about even a quick day trip there. One of the women at Jared's conference is from Mexico and she said she wouldn't even take her kids there! So we ended up spending the day we had allotted for Mexico just relaxing in the hotel, which we needed after a whole week of travels with Charlotte! She's not necessarily the best travel buddy. Though it wasn't all her fault because she wasn't feeling well the whole time. She started to get a stuffy nose a few days into the trip, which worried me with the flights because flying when you're not feeling well can be so painful for your ears. But she did better on the flights when she was a little sick than when she was completely healthy! But we had a great time sight-seeing and enjoyed traveling again since this was our first trip together since Charlotte was born.

Our first impressions of Vegas were not the best because it was about 4 hours after we landed before we got into a room at the Luxor. The airport is maybe a 10-15 minute car ride (with heavy traffic) to the Luxor. But with the shuttle and line at the rental car place, and with the hotel not having our room ready that we had booked AND paid for over a month ago (!!!), we didn't get in bed until it was 6 a.m. EST so we were so exhausted. But we slept in as much as Charlotte allowed and took our time getting ready to go to the Hoover Dam. It's a short drive from Vegas, maybe 40 minutes, and had a good time there. 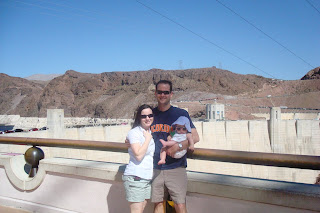 The Grand Canyon is absolutely amazing! We went to the Skywalk, which is built on the property of and run by the Hualapai tribe. It's a glass sidewalk that juts out over the canyon, so you can see the ground 4,000 feet below as you walk on it! It takes about 2 hours and 45 minutes to get there, and 20+ miles of it is not paved. Thank goodnes we had a rental car so we didn't have to worry about tearing up the shocks :) 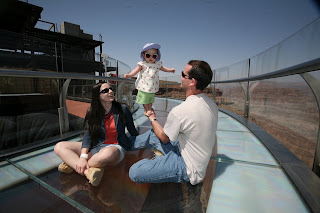 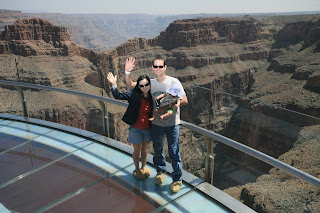 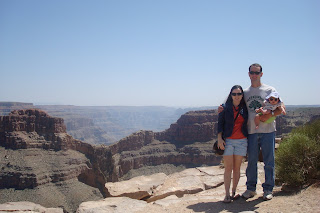 Jared's conference was actually at the Bellagio, so the company paid for our room there! It was so nice! King sized bed, the curtains opened with the press of a button, separate shower and tub, and they monogrammed towels for me (or perhaps the "B" was for "Bellagio"...)! While in Vegas we had dinner at The Buffet at the Wynn (another very nice hotel, though not very thrilled that we brought a stroller in) and went to Fremont Street to see the light show, which Charlotte slept through even though it was very loud. We also saw the fountain show outside of the Bellagio. There were several other things on our "To Do or See" list, but we were just too tired! 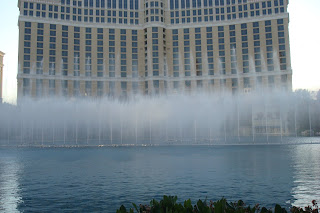 While in San Diego we went to the Zoo. It's supposedly one of the best zoos in the world so we had really high expectations, but we didn't think it was really any better than the Atlanta or Jacksonville Zoos. It was definitely nice and we enjoyed how shaded it was as we walked around, but a lot of the cages were empty and it didn't seem to have any more variety of animals than what you'd expect at another large city zoo. We still had a great time, but just had expectations for something a little more. This is our little monkey outside the monkey cage... 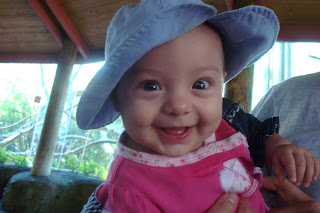 At the airport in Charlotte on the way home... "Charlotte Douglas? Who's that? My name is Charlotte Rollins!" 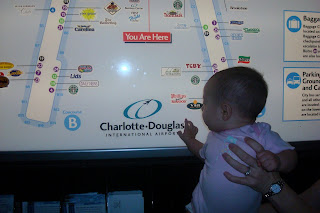 Posted by Brittany @ The Rollins World at 1:09 PM 3 comments Links to this post

Welcome to Our World

I've been meaning to start a family blog for a couple months now and have finally gotten around to it! Since most of our families and friends are outside of Jacksonville and neither of us are good about calling people, this will be a good way for us to keep everyone updated on all that's going on in our lives.

The family picture at the top is from a few weeks ago when our church, Grace Community, had its "Parent-Child Dedication". In all of our cheesiness we (Jared wants to clarify that "we" means "Brittany") thought it would be cute if we matched, so we're all wearing green and my blouse was the same material that Charlotte's adorable little outfit was made out of :) Cheesy? Yes. Adorable? You betcha!

Posted by Brittany @ The Rollins World at 5:25 PM 2 comments Links to this post