Last week the girls and I met up with Arin and her kids for our last Disney day for a couple months. We have the weekday season passes which have blackout dates during the summer. We're not too sad about missing the summer months because it's not even the middle of the summer and it's already ridiculously hot!

We started our day at Hollywood Studios and ran straight for Toy Story Midway Mania, a ride that we missed the last time we went because the line was ridiculously long. We got there around 9:45 and the fast passes were already for 6:10 that evening. The wait time said 70 minutes and we figured that would be the shortest the line would be all day so we hopped in line and heard the "cast member" standing there tell someone else the wait was only 30 minutes. Yay! 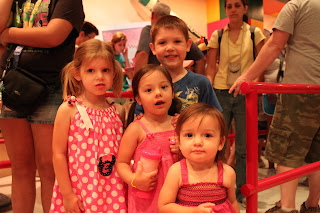 Here is the best shot I could get of 4 kids under the age of 5. 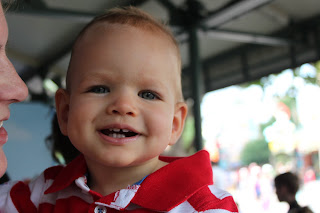 Asa is such a sweet little guy! 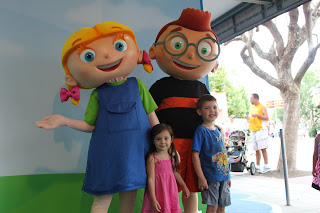 Charlotte and Anson with Annie and Leo from Little Einsteins. Naomi and Ella were not having anything to do with them. Naomi likes the characters from a distance. She gets so excited to see them, especially Mickey & Minnie, but getting close to them freaks her out!

At one point, the kids decided they wanted to play ring around the rosie. Here's how that went down... 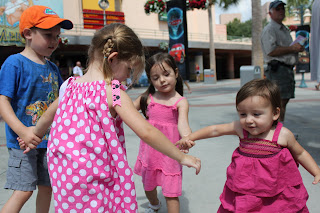 Naomi wanted to play too! 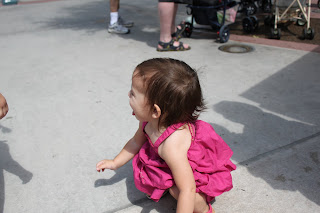 But Naomi wanted to go straight to her favorite part of the game. Instead of "we all fall down" it was just Naomi falling down. 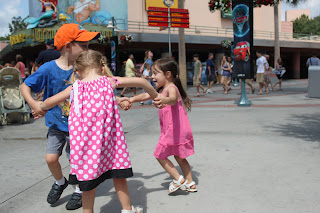 So the older three continued on... 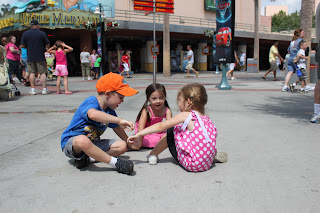 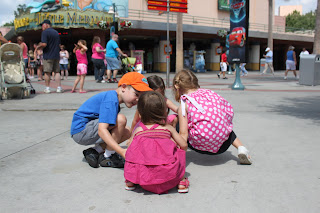 And Naomi came over to join in on the fun part once again! 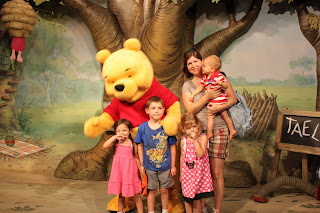 Then we went to meet Winnie the Pooh. All except Naomi were big fans!

After lunch, Arin and I did something crazy and park hopped with the five kids. Did I mention that it was just us with the kids? As in, no Dusty or Jared. From Hollywood Studios there are two ways to get to Magic Kingdom. Drive your car to the MK parking lot, take a tram (because we would have gotten there later in the day and would have been in a parking lot too far away to walk), then jump on the monorail that will take you to the park. Or take a bus to the monorail. Both the tram and the bus require folding up the stroller, which with Jared's help isn't as big of a deal, but I had the double jogging stroller (it maneuvers really easily through the parks) and it doesn't fold up very compactly and you have to lean it just right or hold it so it doesn't fly open. We survived, but it wasn't the easiest process. 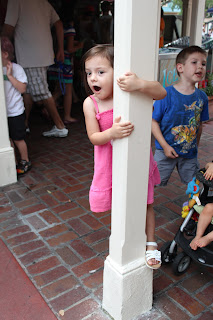 After we did a few rides at Magic Kingdom we went on a hunt for ice cream and caught the end of the parade. This was Charlotte seeing the princesses. Homegirl likes her princesses. 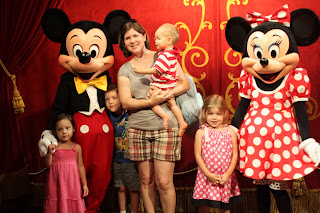 As we were leaving the park, we saw that the wait to meet Mickey was only 5 minutes so we decided to hop in line. Five minutes was actually 10-15 minutes, and of course, like any Disney attraction, you leave through a gift shop. The process of picking out a souvenir took another 10-15 minutes so our 5 minute stop to meet Mickey turned into quite an ordeal. But not as much of an ordeal as it was getting back to the cars... When we went to MK, the bus wasn't too crowded. But the reverse route had a bus full of people. And I had that big ol' honkin' stroller to try to finagle with. I had a couple people offer me their seats because I was holding Naomi but I told them I better stand by the stroller to make sure it didn't unfold. It wasn't the most pleasant ride, but I survived and only fell on the people behind me... twice. I bet they didn't think they'd be getting a lap dance as they left the Magic Kingdom!

Posted by Brittany @ The Rollins World at 3:30 PM

hahaha! Love the last line. so funny. Looks like such a fun day! Love all the pictures of the kids! They are so precious!

I'm glad y'all had a good time. When the blackout days are over, I'd love to go with y'all. I'd like to see the kids reactions to everything!

We did the Toy Story ride-at 9:30pm-after waiting for almost 40 minutes-totally worth the wait! Glad you guys had fun and survived all the transportation :)

(And I'm with you on the summer thing...you couldn't pay me enough to do Disney in the summer!)

I cannot get over how much Charlotte looks like you!!!

Just read this and laughed so hard at the thought of you landing in that guy's lap! That was a fun day! Thanks for the adventure! :o