Jared had a conference in Jersey City last week and I flew up to New York City on Friday so we could have a weekend with just the two of us. Thanks to Toto & Auntie Mel and Grammy & Grampy who split the weekend watching the girls!

Be prepared because I took about 250 pictures and prepare to show you lots of them! If you follow me on Twitter, you'll have likely seen many of these pictures and some of my thoughts on the city, but for those who don't stalk me via all avenues of social media, I'm going to say it all again. It's going to be a sort of narration of the mind of Brittany... so Jared (who I doubt reads the blog) and Shannon might be the only ones who find any sort of humor in it.

The most pointless curtain ever. It's more of a psychological barrier between First Class and Steerage. In case there was any doubt, I was back with the steerage. 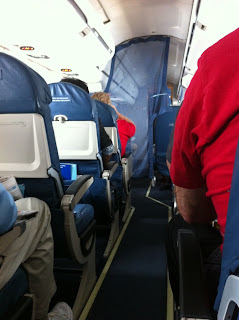 Snacks on a plane. Notice the ingredient and allergy warning. Peanuts. Processed in a plant that produces peanuts. Not sure how else they'd do it... 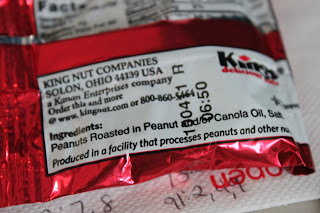 I saw three "I ♥ NY" within the first five minutes of being in New York. I'm pretty sure it's what the locals wear, so I made a mental note to get one before I left the city.

I flew into La Guardia and was on my way to the bus stop when I saw this fella! 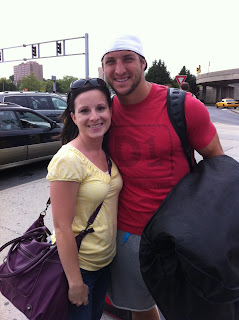 Yeah, that's me and Timmy Tebow. Just another usual Friday, hanging with a Heisman Trophy winner. But I played it so cool. Here's how our conversation went...
Brittany: Hi Timmy... (because those close to him call him Timmy)
Timmy: Hi.
Brittany: I'm sorry to bother you, but my husband and I are huge fans!
Timmy: Oh, thank you! (genuinely sweet)
Brittany: We're both alumni and we just think you're great... Can I get a picture with you?
Timmy: Sure! (So maybe he didn't say this with an exclamation, but he made it seem as if I wasn't the bother that I likely was)
Then his brother or friend or someone who I'm sure has taken hundreds of pictures of strangers with Timmy snapped the picture with my phone. And I thanked him and was walking on Cloud 9 for hours as I tweeted and texted and called everyone to tell them about how cool I (thought I) was because I just saw a celebrity. Not a bad start to the New York weekend!

After taking a bus, I hopped on the 7. That's what the locals call the train that takes them from Flushing Queens (as in, the place where Fran Fine Sheffield is from. I looked for her and Doug Heffernan, but didn't see either of them. Bummer.) into Manhattan. 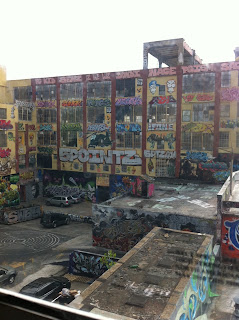 This is where the locals do their art apparently.

I finally made it to the sidewalks of the city and saw this street sign. I immediately wanted to start singing, "Tell all the gang at 42nd Street that I will soon be there!" 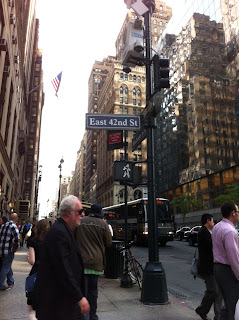 The fun of that quickly faded when I realized I didn't really know where I was. I mean, other than the obvious, at the corner of 42nd Street and Madison. I had the address for the hotel and my trusty iPhone with the directions. But the directions were something like, "Walk south towards..." and I couldn't get oriented with which direction I was facing. And don't forget that I had my luggage and was looking around in total awe of the city I was in. I knew it was just a wee bit obvious that I wasn't from around there so that made me prime mugging material so I was glaring at everyone walking by me like they had intent to take all of my possessions. It took me a minute but I figured out where I was going and made my way to the hotel where I met my knight in shining armor. I made it from the airport to the hotel, taking a bus and a subway, all by myself. I'm a big kid now!

We stayed at the Eastgate Tower Hotel in the Murray Hill area of Manhattan. I think this used to be a residential condo building because all of the rooms are suites with small kitchens. Though a little dated, our room was plenty big. 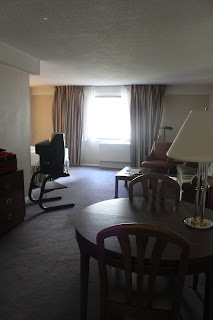 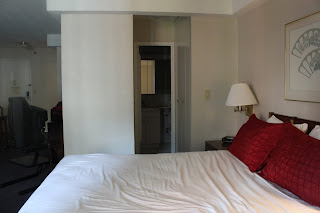 We bought some cereal and milk and had breakfast in the room while there (they have a few dishes and pans in the cabinets). It was nice to take our time getting ready in the mornings and not be starving. 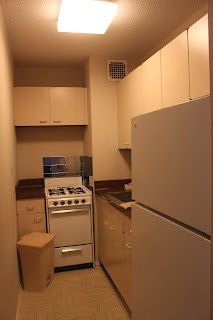 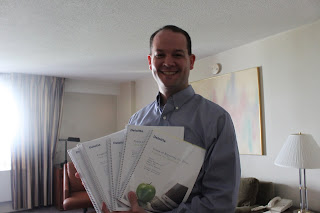 We took about a 30 minute walk to the Laut, a Malaysian-Thai restaurant that I scouted out. I'm going to pretend to be Shannon and tell you what we ate... 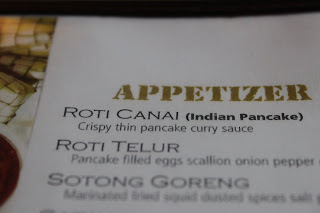 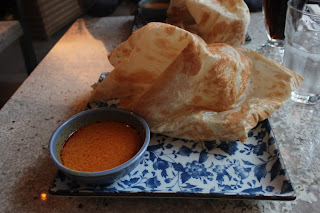 Roti canai, the most delicious thing in the world. It's simple, an Indian pancake, but it's crispy in some parts, doughy in others, and you dip it in that wonderful curry sauce and it's a party for your mouth. But the thing about roti is it's tricky to make. At least we haven't figured out the secret. We can imitate the chicken and some other parts of this Malaysian meal, but the roti is a mystery. Dusty & Arin have tried several times, and they've even gotten one of the secret ingredients from the owner of a Malaysian restaurant in Atlanta, but I don't think they've been able to recreate it yet. So, as simple as this little ditty is, it's a rare treat for us to eat. The Laut did not disappoint! 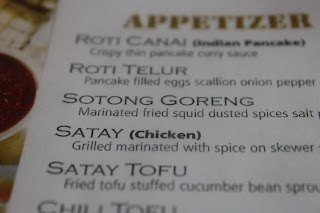 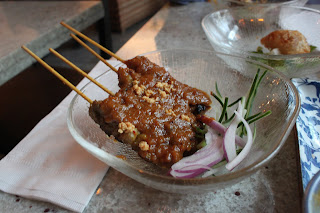 Every other time we've eaten it, we've had the peanut sauce on the side. They lathered it right on the chicken. Delicious!

And instead of a mint at the end of the meal, they gave us a piece of ginger candy. This was like a sticky burning delicious fire in my mouth. Not sure how else to describe it. It was a bit spicy but was pretty good. 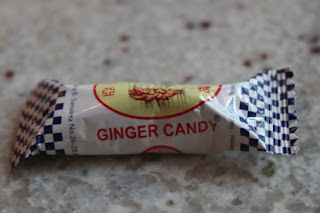 After dinner, Jared and I walked around Union Square Park. 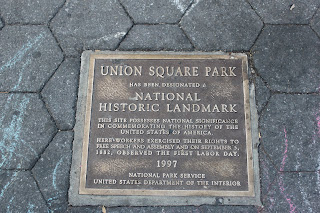 We saw Ghandi going for a walk, Andy Warhol doing some shopping, and George Washington riding a horse. 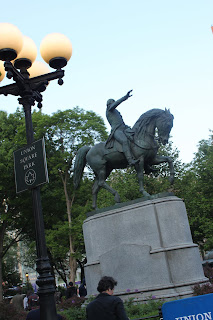 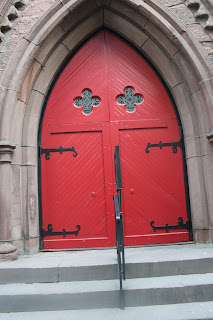 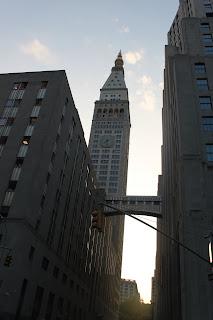 Random cute side street. So charming. 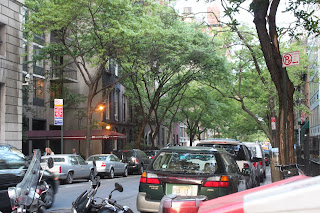 As Jared and I walked around the city we kept asking each other, "How much do you think an apartment in that building costs?" I looked this one up on Zillow . It was built in 1898 and isn't currently on the market but has an estimated value of $3.98 Million. Whoa. 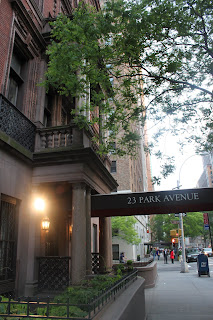 Empire State Building! We planned to go there on Sunday or Monday but it was rainy and foggy both days so we knew we wouldn't be able to see anything from up there. 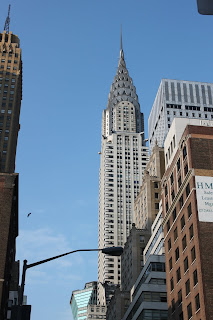 Spikes on some stairs near our hotel. Not how we say "Welcome" in the South! 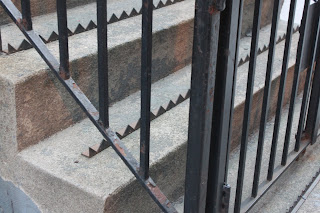 Monks in sneaks and flops... not something you see too often. Unless you're in New York City. I saw monks at the hotel, monks at the Statue of Liberty eating burgers, and several other places around town. Must have been a convention. 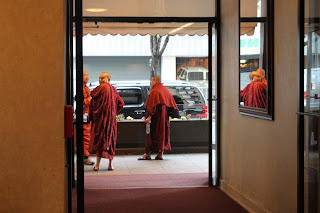 Thus concludes the first day of our trip. I will try to get the rest up tomorrow!

Posted by Brittany @ The Rollins World at 10:06 AM

haha! hilarious! Loved reading this post! So glad you had fun! SOOO cool you saw Tim!! and you had the guts to ask for a pic. I just would have walked by pretending not to notice him b/c I'm a chicken!
I want to know why there were spikes on those steps! So weird? Looking forward to seeing the rest of the pics!!

I loved this! I felt like I was right along with you. :) I'm proud of you for being a big girl and being so urban-city-dwellerish. I probably would have freaked.

And who knew monks ate beef? Or wore tennis shoes?

Also, I'm now intrigued by the secret of Roti canai...