Well, we had a stretch of about four days when we were all well. Then started Charlotte's runny nose. Then came the cough. Then came the fever... **sigh**

Thursday evening of last week her cough got pretty bad. She had trouble sleeping because she was coughing so much and despite the humidifier and sitting in a steamy bathroom, the coughing just didn't settle down until around 2:00 or 2:30 on Friday morning. I ended up sleeping in the recliner with her on my chest, to try to help ease the coughing some. On Friday I took her to the pediatrician just to make sure there wasn't anything down in her lungs that we needed to worry about and it turned out they were perfectly clear. She developed a fever that day and it continued over the weekend, getting up to 104, and after another phone call to the pediatrician to make sure we didn't need to start her on antibiotics (we didn't, but they had given me the prescription just in case we needed it over the weekend), several doses of Tylenol and Motrin, and several homeopathic remedies, she finally started to perk up and the fever went down. This cold season has just been a nightmare!

All ready to read some stories... 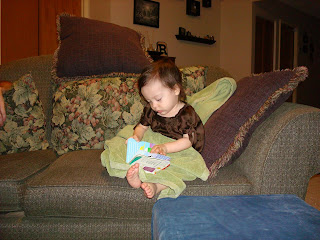 "Hey Dad, are you coming? I'm ready for my story!" 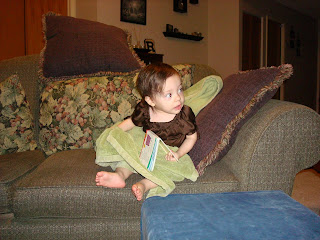 I let Charlotte try using the spoon to feed herself for the first time yesterday. Some of the applesauce actually made it into the mouth... though I think most of it was on the face, the shirt, or in the hair. You turn your back for just one minute, and this is what happens... And apparantly I am not a quick learner because I left her alone with oatmeal this morning. It didn't end up in the hair, but it was everywhere else. She especially enjoyed squishing the oatmeal between her fingers. 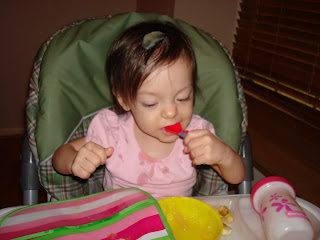 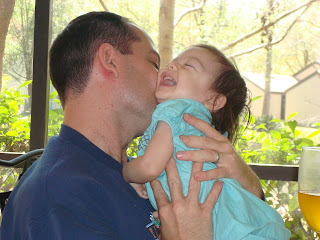 Charlotte found the heating pad that we used when we were sick and put it on her neck like she had seen us doing. 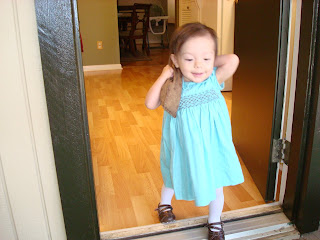 And this picture is from a few weeks ago. I went to a bridal shower for a friend of mine from high school, Brittany Hutchins, the soon-to-be Mrs. McCall. The shower was in Starke, and afterwards Charlotte and I met her Grammy and Grampy in the park. Grammy wanted a picture of her smelling the flowers. She didn't smell them so much as tear them to shreds. "He loves me. He loves me not. He loves me..." 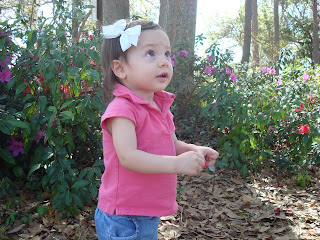 Look at those big brown eyes!

Posted by Brittany @ The Rollins World at 7:58 PM

Oh, she is so precious! I hope you stay well now! What a bad cold season!

Gosh, I hope that poor baby feels better and stays well! She is just beautiful. So petite!

Hope she is feeling better, and you all are too. I have a suggestion for you. I don't get sick as often since my daughter learned this great program in daycare called Germy Wormy Germ Awareness for Germ Transportation Vehicles ages 2 -7. Since then, we no longer play the "pass the germs" game! It teaches kids in a mom-invented, imaginative and drug-free way how to both avoid AND keep from spreading germs. Parents, daycare centers and schools are raving about it!

Give kids a PLACE to give their germs to, instead of YOU!